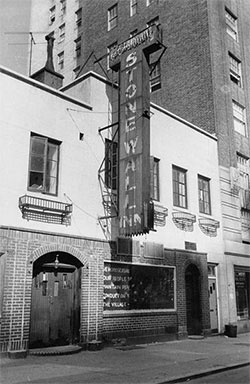 In 2002 Hobart and William Smith Colleges became the first college or university in the United States to offer an undergraduate major in the field of LGBT/Queer Studies. Now in its second decade in existence, The LGBT Studies program at HWS continues to grow and evolve. Lesbian, Gay, Bisexual and Transgender Studies has existed at HWS since the mid-90s, but there has been a visibly queer presence on campus going back to the early seventies. LGBT/Queer Studies as a discipline traces its roots to the early 1970s, when a few institutions—riding the swell of LGBTQ organizing and activism sparked by the Stonewall Riots of 1969—began offering LGBTQ courses. As part of this wave, Hobart and William Smith Colleges began offering a “Lesbian Cosmologies” course in the 1970s and by the 1980s the Colleges were offering: Much like the trajectory that Women’s Studies took, the discipline of LGBT Studies was founded by activists and nurtured in the visible social and political activism of the late sixties through the mid seventies. As the field of LGBTQ Studies continued to establish itself, LGBT Studies at HWS also grew throughout the 1990s with cross-listed courses added that focused on homophobia, those that focused on AIDS, as well as: That HWS was so cutting edge with its growing selection of course offerings in LGBT Studies is a testament to the faculty who fought to teach these courses, and the students who insisted on fighting entrenched homophobia and combating invisibility. This well-developed and longstanding curricular and political focus led to the development of our current program. In 2011 the program officially changed its name from LGB to LGBT Studies, and in the fall of 2013, the program hired its first full-time faculty member, Cael Keegan, who brings expertise in the field of Transgender Studies to the Colleges. Keegan and members of the program’s steering committee are continuing to develop the program by streamlining the curriculum and adding relevant and challenging courses to serve both our majors/minors and the Colleges. As part of this development, the program is working on changing its name to LGBTQ Studies to reflect our growing commitment to and investment in queer theory and praxis.