My research interests are in the general area of theoretical particle physics and gravitation. The two most prominent themes of my current research are QCD Strings and Constrained Quantization.

Lattice calculations show that while the color force binding together a quark and an anti-quark behaves much like the electromagnetic force on very small scales, the color flux coalesces into a string-like object when the quark separation becomes appreciable on the nuclear scale. Mechanically, such a bound system acts like two point masses connected by a cord of energy. This cord, or string, can vibrate and the system can behave in more complicated and interesting ways than, say, a hydrogen atom. A while ago my collaborators and I found a model of this string and the quarks it connects that also incorporates the spin of the quarks. I am currently working to construct the quantum mechanics of this system.

Constrained Mechanical Systems and their Quantization

Most fundamental theories of physics have continuous symmetries that make their description of the physics redundant; they are constrained systems. The quantum mechanics of these systems must take these symmetries into account. I am interested in constructing new tools and applying existing tools to construct the quantum mechanics of constrained systems.

Other research interests of mine are the relationship between gravity, quantum mechanics, and thermodynamics; vortex dynamics and the fractional quantum Hall effect; potential models for quark confinement; and topological mass mechanisms.

My research is multi-faceted, generally focusing particle theory and mathematical physics, with opportunities for involvement by interested students. Two current areas of my work that explore ideas relevant to quantum field theory and string theory are as follows: 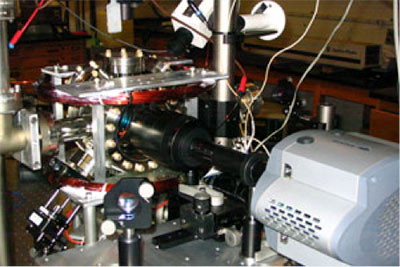 Other areas in which I have an interest include analog algorithms in quantum computing, cooling schedules in simulated annealing, the bosonic decay of Q-balls, the engineering of quantum potentials to produce logarithmic spectra, the use of first-order phase transitions to model phenomena in computer science, economics, and biology, and anything to do with supersymetry.

Encouraging and enabling student achievements is one of our primary goals at HWS. In the Physics Department, our students have opportunities to engage in Honors projects and independent studies both of which require students to actively engage in research. A recent sampling of research:

Albert Holland Prize for Public Presentations of Physics
The annual Albert Holland Prize is awarded to the winner of a competition for the best public presentation in physics by a Hobart or William Smith student. Students present a short 15-minute talk on a standard result in physics. They are judged based on the quality of their scientific content and the quality of their rhetorical skill. The winner receives a $500 prize.

Albert Edward Holland, for whom the prize is named, was president of the Colleges from 1966 to 1968. He was known for his vision, honesty, integrity and his remarkable skills in public presentation. He received a letter of commendation from the U.S. government for employing those skills in helping to save those imprisoned with him in a Japanese prison camp in the Philippines during World War II. While president of the Colleges, he was responsible for the establishment of Geneva Scholars Associates, which provides scholarship aid to students from the Geneva area.

Other Awards
Two awards are presented annually on both Charter Day and at the Ben Hale Dinner; the Outstanding Physics Major Prize ($100 is given), and the Physics Prize for First Year Students (a book is given).