Welcome to our virtual celebration of Charter Day!

This is one of Hobart’s largest annual celebrations, and is held each spring to commemorate the granting of Hobart’s charter by the State of New York on April 10, 1822. During the event, Hobart students receive awards in recognition of their academic achievements, community service and leadership. Our awardees join the ranks of two centuries of student leadership.

While we are not celebrating in-person because of the Coronavirus pandemic, our pride in our Hobart heritage and students remains. Happy 198th Birthday Hobart College and congratulations to our dynamic student leaders! 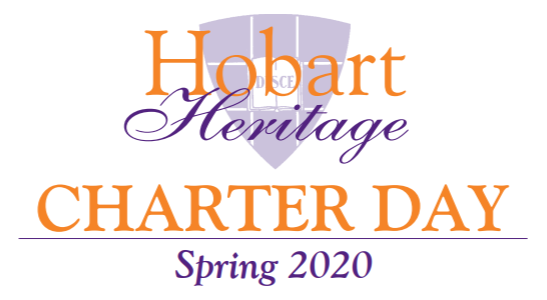 Award Announcements are made in the videos below. A complete list of award recipients will be posted on this webpage on Monday, April 27. Honor Society selection will be announced soon.

Anna B. Comstock Award
This award is given by William Smith Congress and honors a Hobart student who has demonstrated an outstanding commitment to the ideals of the coordinate structure of the Colleges.

Hai Timiai Award for Charter Day
Hai Timiai, the senior honor society at William Smith College, wishes to recognize a member of Hobart College who has enabled William Smith College to grow and thrive for the past 100 years. This person should be dedicated, honest, fun, passionate, selfless and an ally to William Smith students. They should lead by example, working tirelessly, often behind the scenes, to further the mission of the Colleges.

Larry Quijije Award
This award is given by the Hobart Student Government to the member of the Hobart junior class whose outstanding dedication to community service represents the same selfless and compassionate characteristics that Larry is remembered for.

Community Builder Award
The Hobart recipient of this award has worked to create, establish or strengthen bonds among communities at HWS either through, but not limited to, relationship building, programming, artistic endeavors, shared goals or purpose, and/or creating a vision for the future.

The Keith Stockman Prize
This prize was established in 1996 by members of the Chi Phi Fraternity in honor of their alumni advisor and friend, Keith Stockman ’82. It is awarded to the member of the Hobart community who, in keeping with Chi Phi Fraternity, values academic excellence, involvement in community service and a commitment to the Colleges. This award is given to the First Year student of either college who has distinguished themselves in all three areas.

Dexheimer Student Trustee Recognition Award
This award is given to the Hobart College Trustee of 2020, for bringing maturity, common sense, and courage to their stewardship, helping everyone on the Board of Trustees to make better and more informed decisions on behalf of the Colleges.

The Durfee Award
This award is given to the most outstanding senior.

The Dean Benjamin P. Atkinson Award
Established in 1987 by Dr. and Mrs. V. Michael Hogan to honor Ben Atkinson, professor of English from 1947-1982, and Dean of Hobart from 1959-1966. Dr. Atkinson was noted for his interest in archaeology and linguistics in addition to his specialties in Chaucer and Victorian and modern poetry. This award is given to a Hobart student who has done well academically and helped their fellow students.

The Roger J. Frankel Award
This award was established in honor of Roger J. Frankel ’72. As a student, Roger was active on campus, serving as student manager of the football and lacrosse teams, as student director of Freshman Orientation, and serving as undergraduate coordinator of the 150th anniversary celebration of Hobart College. The trophy is given to the Hobart senior who has made the greatest contribution to the Hobart community during their time at the College.

The Keith Lawrence Prize
This award is given to the Hobart student who, working during the term, has taken active part in extracurricular affairs.

The Elizabeth Eaton White Award
This award is given to the student who has shown the most promise in pursuing a successful humanitarian career.

The John S. Witte Endowed Prize
This prize is awarded to a Hobart senior who has dedicated themselves to community service while a student of the College.

Lillian Collins Endowed Scholarship Fund
This fund was established by family and friends of Lillian Collins in recognition of her service and dedication to the students of Hobart and William Smith and greater Geneva community. Lillian was a champion on campus for multicultural students and a staunch supporter of the Afro-Latino Alumni Association. This scholarship is awarded to junior or senior from an historically underrepresented ethnic minority student who is academically qualified and financially deserving. Also, the recipient will demonstrate a commitment to the Colleges and the Geneva community through both their service and leadership.

The Sydney and Alice Jackson Prize
This award is given to a student who contributes significantly to the health and well-being of the Colleges. This prize honors two remarkable people whose lives and work have been devoted to helping others.

Deans Citizenship Awards
To the Hobart students whom we hold in high regard for their contributions to the College. These students have had a close working relationship with the Deans or have had a significant presence in the lives of their peers. They personify the Hobart Heritage in the many ways they have served their alma mater.

When Bishop John Henry Hobart visited Geneva in 1818 on his annual visitation of the Episcopal Diocese of New York, he found a thriving community with a population of 1,500, a hotel, a municipal water system, a post office, a public school, a library, a newspaper, and an active social life. Impressed with Geneva’s development and the beauty of its surroundings, Bishop Hobart believed that Geneva, with its strategic location, would be an ideal place to establish an institution, not only of learning but also for religious worship and instruction to aid the Church and its Ministry.

Bishop Hobart met with Trustees of Geneva Academy to outline his vision. The Academy had been organized in 1796 and granted a charter in 1813. The Bishop proposed to use the corporate foundation of the Academy, if the Trustees would petition for a college charter. Also required was the construction of a new building for the Academy. The next morning the Bishop met with a few of the Trustees to determine a location for the proposed college. The Bishop chose the South Main Street site for its lake view and its proximity to the community. In 1821, with donations from the citizens of Geneva, the construction of Geneva Hall began on this site. On April 10, 1822, a provisional college charter was granted. After meeting certain conditions of the provisional charter, a permanent charter for Geneva College was received on February 8, 1825. Geneva College became Hobart Free College in 1852 and Hobart College in 1860.

College convocations began early in the 19th century. By the Civil War period, these events included participation by faculty, alumni and students in Class Day celebrations. By the mid-20th century, they were called Moving Up Day and Charter Day. Today’s event celebrates not only the students and their accomplishments, but also the founding and chartering of the College in 1822.

The Druid Society for seniors, founded in 1903, defines the highest goals for a Hobart student: character, leadership and loyalty. The Druids are the guardians of Hobart traditions and advise the Dean and President on matters relating to Hobart heritage and customs.

The Chimera Society for juniors (1903) takes as its emblem a mythical creature with a lion’s head, a goat’s body and a serpent’s tail. The students of Chimera are chosen on the basis of their many accomplishments and service to the Colleges.

The Orange Key Society for sophomores (1926) recognizes those who have had an exceptional first year at Hobart based on scholarship, leadership and accomplishments. Its emblem, the orange key superimposed on a purple “H,” represents the liberal arts education that Hobart students receive.

The alma mater was first performed at the Hobart Glee Club’s inaugural performance in December of 1900 under the direction of Professor of Modern Languages Charles J. Rose ’76, who is credited as the musical author. Professor Rose, according to The Hobart Song Book, was “a student of the Royal Conservatory of Music in Stuttgart, Germany.” The words were written by Edward J. Cook, Class of 1895, at the request of the literary editor of the 1896 Echo of Seneca yearbook, where the song was first published. The phrase “Hip Hobart,” which is featured prominently throughout the song, is derived from the college cheer that was popular at sporting events of the day.

Raise the orange and purple high,
Let us shame them never,
Shout the triumph to the sky,
“Hip Hobart, forever!”